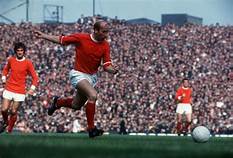 Where on earth is he going with that?, I hear you thinking.

Bobby Charlton was a boyhood hero of many; but his appeal was not confined to young fanatics alone. My late father revered him as much as he did Arnold Palmer. So it was almost a dream come true that, through circumstances too lengthy to explain here, Dad was Charlton’s exclusive host and guide at Trooping the Colour about ten years ago.

For this more senior fan, the highlight of the gloriously sunny day, was when Charlton suggested walking back to his hotel and accepting Dad’s request to escort him. It was probably about a mile, but every recognition was acknowledged, every request for an autograph graciously and patiently provided. It gave lie to the saying that you should never meet your heroes.

And whilst on the subject of his heroes, another, of a completely different kind, was John Henry Newman, (1801-1890) who converted from a Church of England priest to a Catholic one, and became a Cardinal. This Sunday, he will go a step or two further and  be made a saint. Newman was the writer of the poem The Dream of Gerontius, set to music by Elgar, and about which I wrote in April 2017 (see Archives, right). The poem tells of the passing of a man’s soul through death (the name coming from the Greek geron, old man) and its escort by a guardian angel to judgment and purgatory. The text includes words to the hymns Firmly I believe and truly and Praise to the Holiest.

It is a magnificent choral work, (Elgar wrote ‘This is the best of me’ at the foot of the score) in which I once sang at the Royal Festival Hall, and today I am plucking out those few minutes as the soul, accompanied by the angel, approaches judgment with the mighty acclaim ‘Praise to the holiest’. It is about as confident an affirmation of belief as you will find in all music: the words of the hymn embody all that it is to be a Christian, with Elgar’s music building to this huge statement after the angel’s brief introduction. And it doesn’t stop there, but culminates in a massive and enduring note, with the line ‘Most sure in all his ways.’

It actually doesn’t matter what your religious persuasion is, or whether you don’t have one at all: neither will be a barrier to your appreciation of these few minutes.

A final, and personal, thought on birthdays. If my father were alive today, he would be 93; but he would also be celebrating his youngest sibling and my very dear godmother, Pat, reaching her 90th birthday – as well as joining two older sisters in their 90s. Funny to see how you can forge an unlikely link between Charlton, Dad, Newman, Elgar, and Pat: heroes all of them to me, but today this has to be for Pat. Happy birthday to my terrific godmother!

Click on the image – and don’t be shy with the volume.