What a relief it is in these chaotic times to be able to wallow in music.

‘B*******s to Brexit’ will no doubt land up in The Oxford Dictionary of Quotations one day. The so-called ‘trouser role’ in opera is the part of a man, sung by a woman, on account of the music being too high for even the highest of tenor voices. Until the days of Mozart, (mid-late 18th century), such roles were sung by men who’d undergone the op and become a castrato. Their necessity came about as a result of women not being permitted to sing in church choirs: the demands of church music required their range, but not their presence.

It was a dangerous procedure, and you probably had a 50/50 chance of survival. But for many poor families, the risk was worth it: the best castrati were the stars of their day and would earn vast sums. The effect was to preserve the pre-puberty voice, and enable it to reach dizzy heights. I will spare you the gory details, suffice to say that it didn’t entail full removal; just the severing of the spermatic chord, normally in a bath. And with no anesthetic. Bologna was a renowned centre: you might even equate the numbers of outlets with modern day tattoo parlours.

Don’t worry, I haven’t lost the plot, you’re on the right site. All this is necessary background to today’s choice, because many often wonder why male parts are sometimes sung by women. The short answer is that the church finally outlawed the very procedure it had initiated, and the castrato singer was no longer.

There are many famous trouser roles, Cherubino in Mozart’s Nozze di Figaro is probably the most famous, but in another, less well-known of his operas, La Clemenza di Tito, Sesto, the lover of Vitellia is sung by a soprano. (At its premier in 1791, the year of Mozart’s sad and short life, it was sung by a castrato.) In Act 1 of, it must be said, a fairly dull opera, Sesto has this knockout aria, where Mozart jostles singer with clarinetist: in some recordings it is abundantly clear that singer and instrumentalist are trying to out-do the other.

Not here. The dialogue between Joyce DiDonato and Julien Hervé is finely balanced, both shining equally: be patient, there is some highly skilled and dramatic music here.

In the context of our current ‘rainbow of chaos’, the opening lines caught my attention. ‘I go, but, my dearest, make peace with me again. I will be what you would most have me be, do whatever you wish.’

Our government’s negotiating skills summed up by a castrato, no less.

Today marks the last day of Christmas, the feast of the Epiphany. The story goes that the three wise men arrived at the stable to pay homage to the infant child, Jesus, with their gifts of gold, frankincense, and myrrh. 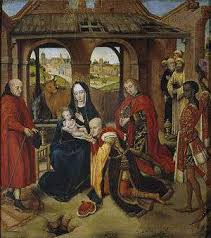 So I cannot resist one last Christmas offering, appropriate for the occasion. I posted a version of this piece in 2016, but I have yet to hear it sung better than this.

Peter Cornelius (1824-74) was a friend of both Wagner and Liszt, but he was not especially sympathetic to their styles. Although he wrote plenty of other compositions, he is one of those composers who is now known chiefly for one piece alone, in his case The Three Kings, and it is the perfect way to bring the season to a close. So today I will be brief and steer you directly to the music, with no attempt to add anything wise to the words of Cornelius, for the text is his, too.

In 2016, I was fortunate enough to play a part in putting together the Christmas concert for the MS Society in St Paul’s Cathedral. Gerald Finley sang the piece with the choir. I have struggled in vain to isolate the clip, but all you have to do is to scroll to 1.16.40 for a few minutes of undiluted nectar.  On that day, I heard it twice in rehearsal; but professionals always hold something back for the big moment, and the sound and clarity on the occasion were unforgettable.

I don’t have any prizes to hand out, but I will be very impressed if anyone can identify both faces behind him.